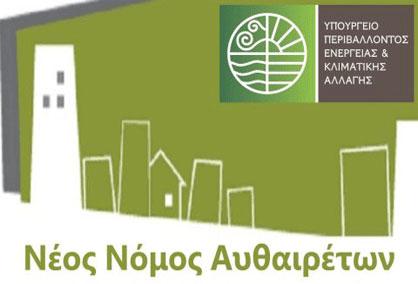 The fifth, in turn, law on arbitrariness is now in force, after its publication in the Government Gazette. A key characteristic of Law 4491/17 is the alleviation of fines for several types of irregularities and for vulnerable population groups. Below are the key points of the new setup, in the form of question-answers.

Which urban planning offenses do not require legalization?

- Building deviations of up to 10% and up to 50 m2, works that have been executed without permission, but without exceeding the law (eg not exceeding the building factor). Also, switching without authorization from one master to another, but allowed in that area, and performing small-scale work without permission. A fine for erection and maintenance is imposed on these violations, as is the case.

What about small town planning violations?

- The law includes a list of 18 categories of town planning offenses which are legalized only by paying a fee of EUR 250. Among them, the addition of external insulation to the building, the construction of a pergola up to 50 sqm, warehouse up to 15 sqm, rough wooden constructions up to 8 sq. M.

- The first ones are legalized by payment of a deposit and 60% of the fine. The latter paying the fee and 100% of the fine. For arbitrary unlawfulness of more than 40%, the permanent exclusion from the demolition will be made with an additional purchase rate when the relevant electronic system is prepared.

What if someone inherits property with arbitrariness?

- If it was erected by 28.7.2011, it can legalize it according to the current. The only difference is that he has to submit to the supporting documents the E9 of the deceased.

What is the case for arbitrators who have begun the affiliation process and have not completed it?

- These arbitrary ones may be subject to the new law. The debt is recalculated and offset against the amounts already paid. Particularly for the regulation of 2010 for semi-open land (Law 3843), the balance must be paid as a single payment in favor of the Green Fund.

How much does the fee cost?

How is the fine calculated?

- The calculation of the fine shall be based on the area of ​​the arbitrary construction or use at the zone price in the property area, according to the system of objective values, by the 15% factor and on the coefficients of the relevant box indications, where required (depending on the category of arbitrary).

How is the fine paid?

Who are entitled to a discount?